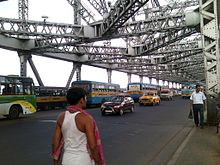 The bridge connects Howrah and Kolkata. The Bridge is made over the river Hooghly (a branch of River Ganga).

Rendel, Palmer and Tritton  have designed of the bridge and was constructed by Cleveland Bridge & Engineering Company.

It is  Kolkata Port Trust which is maintaining the bridge. 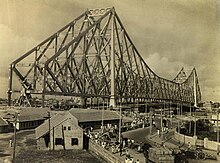 Howrah Bridge ranks 6th among the cantilever suspension type bridges. At the time of construction its rank was 3rd.

It has been reported that the construction of bridge was started on 1936 and got ended in 1942. For the first time ,it was opened for the public transport on 3 Feb 1943.

After the name of Rabindranath Tagore (first Asian Nobel laureate), On 14 June 1965 the bridge was renamed to Rabindra Setu.

The Howrah bridge consumed about 26,500 tons of steel, as it was made by steel and one of the suppliers of steel was Tata Steel.

The remarkable feature of the bridge is that, no bolts and nuts were used for the construction of this bridge.

The length of the bridge is 705 meter and width is 71 ft with two footpaths of 15 ft on either side.

The historic bridge witnesses a large number of traffic daily. Over 1 million vehicles and record number of pedestrians use it.

It is the busiest cantilever bridge in the world. Though the first vehicle to use it was a tram, from 1993 trams were stopped from using it to reduce the load.